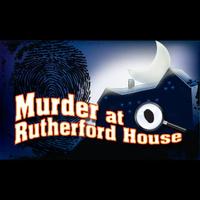 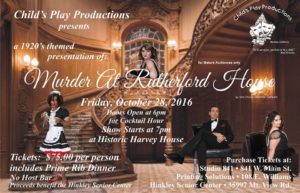 Studio 841 is proud to be a part of this production behind the scenes. We will be doing hair and makeup as seen on this flyer. We will be selling a limited number of tickets so purchase them soon, as they sell out fast!!! For more info Contact Jackie at Studio 841 at (760) 256-6077

It is the fifth anniversary of the death of Lord Rutherford. Lady Rutherford is throwing her annual dinner in commemoration of the event– to which you are cordially invited. On arrival you are given a character name and a dossier explaining your background and connection to the Rutherford family. Over cocktails, you mingle with the other guests, spotting the Baroness von Keepsemfrumfloppen and figuring she’s an actress, but what about all these other people? Suddenly, there’s a gunshot resulting in the evening’s first corpse. The body is removed and you sit down to dinner. A detective reveals himself and begins the investigation. What have you observed so far? Have you a clue to the killer? Clues seem to be everywhere, but which ones count and which are red herrings? Ultimately, there is a parade of suspects. You may question them. Perhaps you ask just the right question at the right time and unmask the murderer. Perhaps you ask the wrong question and become the prime suspect! You begin to wonder: will you survive till the coffee and cordials are served? In the end, all is revealed and justice prevails. The Silver Sleuth Award is given to the guest who best explained the who, why and how dunit of the murder at Rutherford House!!!

“Like a life sized game of Clue…. Wonderfully enjoyable.” – Boston Globe
“A party game for people in search of more spice in their entrees.” – New York Post

MURDER AT RUTHERFORD HOUSE was first performed at the original Rutherford House Mansion in New York City on September 10, 1986. It was directed by Tom Chiodo

We encourage you to dress 1920’s themed and join in the fun!
Drawings, prizes and much more!!
For Mature Audiences Only!

Want to garentee your ticket? Reserve your ticket with deposit.
Only 50 tickets available with this offer Now until July 31st
For more info contact:
Terry Ellis
Auction Event Coordinator
terry.ellis13@yahoo.com
760-963-6001

From the Cast of Murder At Rutherford…..” A Little Party Never Killed Nobody”

Studio 841 is a full service Salon specializing in Men, Women & Children's Hair. Our Hair Artistry Technicians are certified in Specialty Color, Color Correction, Hair Extensions, Smoothing Systems along with Ethnic Hair services for all ages. Our Stylists have the best education with ongoing training in the most current trends. WANT SPA SERVICES? CLICK HERE

© 2019 Studio 841 All Rights Reserved
Design by Imagine Greater Designs
We use cookies to ensure that we give you the best experience on our website. If you continue to use this site we will assume that you are happy with it.Ok